Showing posts from June, 2015
Show all

The Magic of Music

June 16, 2015
Just came across this video of a violinist at the Pairi Daiza - a zoo and botanical garden in Belgium - serenading and appreciative elephant. What this says about the importance of beautiful music to sentient beings cannot be overstated.  Enjoy. Click Here to view.
Post a Comment
Read more

June 14, 2015
from the album White Men Are Black Men Too (2015) Over the years, one of the recurring issues that I have had with this blog is its format.  In particularly, the documenting of individual songs does not allow me to write about albums I dig.  This is compounded by the struggle I often have in determining which track on the album "I dig most."  This consternation results in my not writing about any of the songs, thereby not sharing great songs with my cherished readers. This is certainly the case with the album White Men Are Black Men Too by Young Fathers.  This is by far my favorite album of 2015, thus far.  It is a complete work that transcends genres with a fresh and modern bounce that I find infectious. Putting a gun to my head, the song I have listed above is the quick-tempo'd and catchy single,  Shame .  However, it could easily be any of half a dozen other tracks on this Scottish band's great album. Click Here to watch the official music video for Shame
Post a Comment
Read more

The Magnificence of Restraint 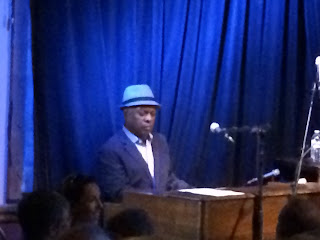 Last night, Richie Beans and I caught a Booker T. Jones show at Eddies Attic in Decatur, Georgia. This is the third time that I have had a chance to see Booker T, the first was at the Bob Dylan 30th Anniversary Concert at Madison Square Garden and the second was on a ridiculously hot day at Dobbins Air Force Base outside of Atlanta when he performed with the MGs.  These two concerts rank among the greatest shows I have ever seen. To me, the genius of Booker T is in his restraint.  In a musical world that always pushes towards "louder-faster", Booker T has crafted his music in a way that caps both volume and tempo.  This creates a natural tension for the listener and places an emphasis on the music's tone, technique, and structure. The magnificence of his music is that - despite the greatness of the musicians - nobody ever overplays.  Last night you heard it in songs like Born Under A Bad Sign (he co-wrote this song for Albert King when he was 22 years old, intr
Post a Comment
Read more

June 10, 2015
from the album Sundown Over Ghost Town (2015) A lucky horseshoe in an pile of junk.  A hot rod decaying in the thorns and the weeds.  Daisy seeds planted.  Yesterday's sages.  Dried up old cactus.  These are all visual images in Eilen Jewell's new song  Something's Weren't Meant To Be . Coping with a world of unrealized dreams is part of the human condition.  A failed business.  A relationship that didn't work out.  The guitar sitting in the corner of the room that never gets played.  These are all a part of life. I really dig how Eilen Jewell captures this reality in a melancholy country waltz.  It is a beautiful musical form that is perfectly suited to capture a sad, universal truth. I also dig the craft in assembling this song.  The soft country piano, the steel guitar that sounds like a teardrop, the thud of the snare, the grit in the lead guitar tone.  Each tone is magnificently placed and restrained. And then there is the curious choice of " s
Post a Comment
Read more
More posts