Showing posts from July, 2015
Show all

July 29, 2015
from the album Watkins Family Hour (2015) I recently read about the funeral for a young deadhead where her friends sang Brokedown Palace in her honor.  What a beautiful tribute! This song off of American Beauty is beyond enchanting.  The space between the notes and the moving lyric approach perfection.  I can't imagine keeping a dry eye in the room as they sang: Fare thee well Fare thee well I love you more than words can tell Listen to the river sing sweet songs To rock my soul Closing their debut album, Watkins Family Hour deliver a thoughtful rendition of this song with the grace and care it deserves.  Each instrument plays with restraint.  The vocals are tender and thoughtful. After losing myself in this song, I learned that the band consists of members of Nickel Creek and Fiona Apple.  Two great tastes that taste great together. Click Here to watch Watkins Family Hour perform Brokedown Palac e on CBS This Morning. Click Here to listen to the original ver
Post a Comment
Read more

July 24, 2015
from the album Star Wars (2015) Sometimes, all it takes is a single line for me to be forever hooked into a song. Such is the case Taste The Ceiling from Wilco's brand new, unexpected release.  The line poses the questions: Why do our disasters creep so slowly into view? I've been singing this line like a mantra.  I've picked up the old acoustic and learned the chords so I can sing along.  I've been scanning my freeze frame of a world looking for creepers (and finding them). It is fantastic when a song reveals a universal truth that otherwise goes unnoticed.  Here is the full lyric: I was only asking for a moment of the truth I can't fight the feeling when I'm hanging out with you Why do I forgive you because I get confused I could never leave behind the part of me that you refuse I was on the ceiling I could almost feel the sun Try the words in sequence but that's never how it's done Why do our disasters creep so slowly into view I
1 comment
Read more 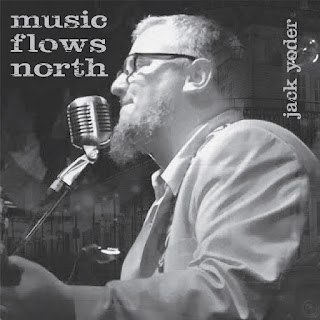 Production Notes from EP A few weeks ago, Jack Yoder released Music Flows North on 40 Watt Records.  I had the great privilege of producing this EP. I have known Jack for twenty years and have seen him play everywhere from jam-packed clubs to my funky old sofa.  I wildly admire his talent and aimed to create a record that captured his tone and technique in a manner that was authentic and pure.  Most musicians I know would pucker at the thought of this, but Jack is a musician's musician who simply grinned and said "Well, All Right." We decided that the best place to make this record was in New Orleans.  This is where Jack lived and played in the years surrounding Hurricane Katrina.  This is also the place where Jack seasoned his chops and evolved from a player to a musician. The Musicians Accompanying Jack on the record is Gregory "Li'l G" Rosary.  Li'l G and Jack used to play together regularly, everywhere from street corners to festivals.
Post a Comment
Read more
More posts