Showing posts from March, 2016
Show all

March 29, 2016
A very dear friend died this morning.  He was a brilliant scientist and a lover of the arts.  I am richer for our time together. We spent some great times talking about music.  He fancied Cat Stevens, Django Reinhardt, and a wide range of classical music.  When he rocked out, it was to The Rolling Stones. He described his quest in life as "seeking out mellifluous adagios."  I have come to love that phrase. Sweet-sounding, slowly played music is a great metaphor for the beauty in life.  My dear friend was one who truly appreciated those moments.  He will be missed.
4 comments
Read more

March 26, 2016
from the album What I'm Feelin' (2016) There is a place that I like to go.  It exists in my mind and the only way I know to get there is by listening to a handful of 1970's R&B masters, particularly Bill Withers and Stevie Wonder. Throughout my musical journey, I have waited in vain for a new artist to emerge who can take me to that place. With each new Anthony Hamilton release, I wonder "Will this be the record"?   After all he has the voice and the proven ability to blow me away with songs like Sista Big Bones , Woo , and Freedom (from the Django Unchained soundtrack). On his new album,  What I'm Feelin' , there are great songs of all shapes and sizes.  One of them - Still - comes damn close. But it a a funky southern soul number called Ain't No Shame that has put me under a spell.  It takes me to a different place.  A place a little bit dirtier, a bit nastier, a bit more southern.  I dig this place. Click Here to listen to Ain&#
Post a Comment
Read more

March 23, 2016
from the album Black Ark Classic Songs (2016) Black Ark Studios in Kingston, Jamaica was a magical place.  Between 1973 and 1979, some of the greatest artists in reggae recorded here.  Artists like Bob Marley & The Wailers, The Heptones, and Junior Marvin.  As it became increasingly renowned, the cast of characters expanded to include The Clash and Paul McCartney. The brilliance of Black Ark Studios was in its lo-fi capabilities and how those technological limitations drove innovation.  This created a uniqueness in sound that defined the studio.  These lo-fi innovations included tacking chicken wire around the drum booth and placing microphones in cardboard tubes stuffed with tin foil.  These techniques created unique tones that could not be replicated elsewhere. There was also some black magic involved.  Ganja smoke was regularly blown on the recording tape.  It was also occasionally sprayed with mixtures of blood, urine, and whiskey so that the tracks would benefit from th
Post a Comment
Read more

March 22, 2016
from the album The Narrows (2016) I have found myself absorbed in the song Cry Cry by Grant Lee Buffalo over the past few days. There are so many things I dig about this song.  In no particular order: -->  The tempo is slow, giving the song space.  I can almost hear an imaginary metronome saying "tic-toc, tic-toc" -->  The way the vocals hang out the word "cry" flashes a hint of Chris Isaak. -->  The intro has a beat and vibe that takes me back to Springsteen's I'm On Fire -->  The meter of the vocals in the verse have a Robert Plant quality -->  The tone of the lead guitar and how it hangs a little bit behind the beat But the thing I dig most is how this song maintains a sense of originality within its alt-country noir framework.  For those who admire Grant-Lee Buffalo, this song makes a great addition to your ever-evolving playlist.  For those who are less familiar, dive in. Click Here to listen to Cry Cry by Grant-Lee Buff
Post a Comment
Read more

March 21, 2016
from the album Distortland (2016) Every day is a gift .  This is my latest mantra.  Seek out joy.  Find a happy spot.  Don't hurry off too quick.  Chill out.  Enjoy. So this afternoon I took a little time for myself.  Got fuzzy and drove real fast down an Alabama Highway.  Windows down.  Music blasting.  Pull into a bar for a few tequila shots.  Sit on a picnic table.  Absorb a little sunshine.  Get back in the car.  Crank more tunes. Styggo -  from The Dandy Warhol's forthcoming album Distortland - is the song of the day. Feel the vibe.  Let the bass line shake your metal.  Mind-meld with the melody. Do-do-do-do-do-do Do-do-do-do-do-do Every day is a gift. Click Here to listen to Styggo by The Dandy Warhols.
Post a Comment
Read more

March 15, 2016
from the album Dig In Deep (2016) The past sixty years is filled with modern artists of all genres putting their take on classic blues songs.  As Willie Dixon famously said "The blues are the roots, the rest are the fruits." I guess that is why I dig it so when blues artists cover songs from other genres.  Perhaps nobody did it better than Etta James.  Her covers of The Rolling Stones' Miss You and Guns 'n Roses Welcome To The Jungle are staples in some of my favorite playlists. The latest addition to my roots-cover-fruits playlist is Need You Tonight by Bonnie Raitt.   On this rendition, Ms. Raitt takes the INXS classic and lends it to a funkified southern groove.  I dig the percussive sway, the slide guitar, the stops, and - of course - the vocals.  Good stuff. Click Here to listen to Bonnie Raitt cover Need You Tonight.
Post a Comment
Read more

March 04, 2016
from the album Full Circle (2016) Once upon a time, I left the great cosmopolis to move down south.  ATL.  There were lots of reasons.  When I look back, the thing that may have pushed me over the top was the music scene.  Everything was here.  Ska, Rock, Blues, Country, Hip Hop, Rap, Bluegrass ... Everything. Stuck in town on business over a weekend, I found a club where Jonathan Richmond was playing on Saturday night.  It was liquor-soaked and marvelous.  The next morning, my hungover skeleton found a place called Smith's Olde Bar.  The sign said "Sunday Gospel Brunch."  It might as well have said "Salvation." By the time the band played " This Little Light Of Mine ," my future was written. A few months later, an advertising gal hooked me up with a band that needed a bass player.  It was the start of a favorite chapter in my life.  Pretty soon we were sweethearts of the redneck underground, barnstorming the southeast with our rockabilly, cou
Post a Comment
Read more 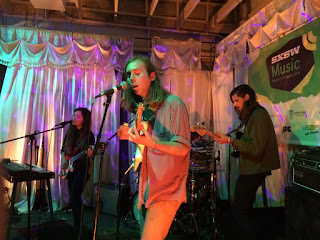 from the album Plaza (2016) I have spent the past few weeks reminiscing about good times had at SXSW in recent years and trying to rationalize a way to make it this year. The pain of not attending was amplified last week when Quilt released their latest album, Plaza .  Catching a Quilt show a few years ago was one of the unexpected treasures that make SXSW so fantastic.  I think of my funky friends dancing in front of the stage while the band laid down their trippy groove.  It was heaven The song I've been digging most of the new album is Roller.   This song has a great groove.  It is a dreamy with melody.  Can't wait to reconnect with the funky friends and lay this one on them. Click Here to watch the official video for Roller .
Post a Comment
Read more
More posts